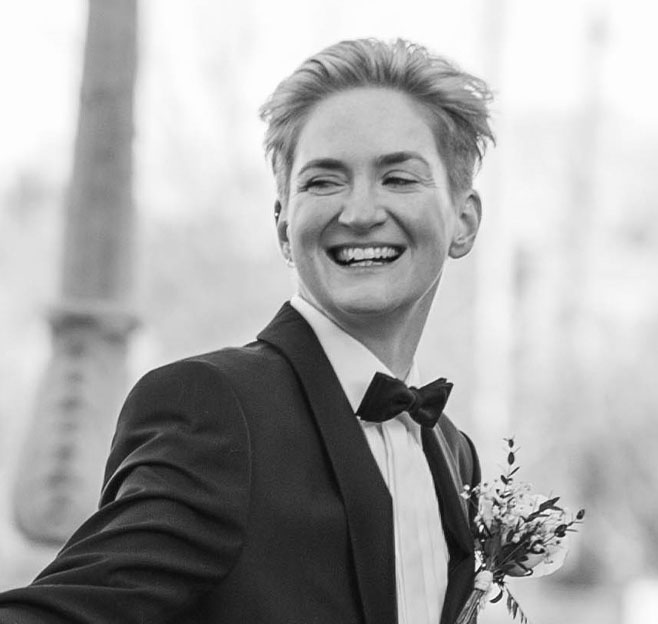 Micky identifies as non-binary, gender-fluid and queer. Born in 1979 in Germany, they started volunteering for non-profits in their teens. After graduating from an American High School in 1997, Micky has lived 20 years of their life in Germany’s queer capital, Berlin, until immigrating to Canada. In Berlin, Micky has worked as a registered nurse, with a specialization on trauma and PTSD. Micky has helped set up an award-winning mental health project called SOTERIA (Greek for “healing”) for young adults suffering from acute psychosis and suicidal thoughts. They also worked intensively on grief rituals, with their teacher Sobonfu Somé.

Since 2020, Micky resides in Montréal, Québec, married to the love of their life. Transgender has accompanied Micky for decades, and on many levels: as a member of the queer community, a drag king in nightlife, a model in visibility photo projects including Finn Ballard’s TRANSMASCULINITIES calendar 2011 and Cora Hamilton’s QUEER BERLIN series 2019 (@coraefhamilton), a regular attendant of Wigstoeckel Transgender United, a friend and nurse caring for post-surgery transmen, and last not least as part of their own identity.

Micky holds a master’s degree in cultural anthropology from Free University Berlin, with a focus on transgender communities and indigenous expressions of non-binary identities across the globe.

Micky has worked in a peer coming-out project (abqueer.de), as a lecturer at Universities and hospitals (incl. Westfälische Wilhelms-Universität Münster, Charité University hospital) and has given numerous presentations to physicians, medical staff and student groups. They are very sociable and enjoy teaching and giving public speeches that are both enlightening and fun.

Apart from trans topics, their interests include the Swahili Coast of East Africa & Zanzibar, Queer Islam, and Latin American poetry. Micky loves traveling, studying foreign languages, and being a foodie – which is great if you live in Montreal 😊.

Gabrielle Lory is currently earning her doctorate in Sociology. Before coming to West Virginia, she attended the University of Georgia where she obtained her BA in Sociology and her MA from Georgia Southern University in Criminology.

Kohan is a 30-year-old, female to male transgender advocate from Tennessee. He and his service dog Linus make a perfect team.