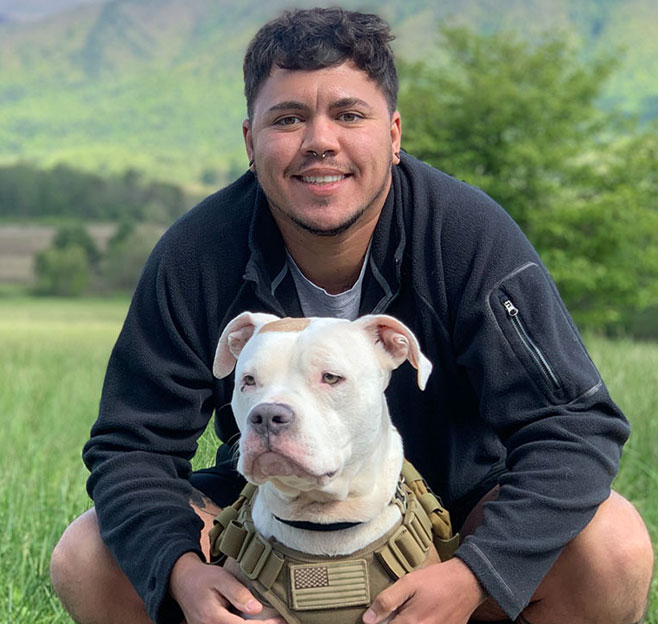 Kohan is a 30-year-old, female to male transgender advocate from Tennessee. He and his service dog Linus make a perfect team. Kohan is a man of many talents and holds years of experience in being a frontline worker as a firefighter. He is also a handy outdoorsman with significant knowledge and experience in telecommunications and the infrastructure supporting it. After a career-ending injury and being diagnosed with PTSD, Kohan found a strong desire to help others. His focus switched from one frontline to another. He now utilizes his time to educate and advocate for mental health awareness and support regarding Transgender individuals in the business place, as well as bringing greater attention and focus to PTSD and the stigmas surrounding mental health. With Kohans life mantra being “what’s important now” (WIN), raising awareness and education is at the top of his list. Working hand in paw with Linus, Kohan is extremely versed in the gaps that hinder those with disabilities, especially those who require service dogs. There are complex gray areas in the Federal laws surrounding the service animal and handler. Kohan can explain first hand experiences and shine a clearer light on the American with Disabilities Act (ADA), and how businesses and the public can properly respond to those requiring a service animal. With a world that is deserving of equality, but ever complex, Kohan can helpbring education and awareness on multiple platforms to you based on personal, relatable, life experiences. As for Linus, he is sure to tag along because everyone loves a furry four legged friend.

Micky identifies as non-binary, gender-fluid and queer. Born in 1979 in Germany, they started volunteering for non-profits in their teens.

Gabrielle Lory is currently earning her doctorate in Sociology. Before coming to West Virginia, she attended the University of Georgia where she obtained her BA in Sociology and her MA from Georgia Southern University in Criminology.